As someone who eats plant-based food, I’ve studied quite a bit about soy.

This small bean, in its natural form, contains a lot of protein, fiber, and a healthy dose of vitamins and minerals.

It’s also known to help reduce cholesterol. It has been a staple in traditional diets for over 6,000 years.

It’s easy to read about the benefits of soy and conclude that soy-based protein powder is a great option if you eat a plant-based diet.

If you are looking to boost your protein intake, it seems that soy protein powder is an obvious choice.

But, and this is a big BUT, there are actually a LOT of reasons why soy protein powder may not be a healthy option.

If you take a careful look into the research, you can find plenty of cause for concern.

Here Are 5 Reasons Why Soy Protein Powder Could Be a Bad Choice For You.

So let’s dig a little deeper into each one of these points. 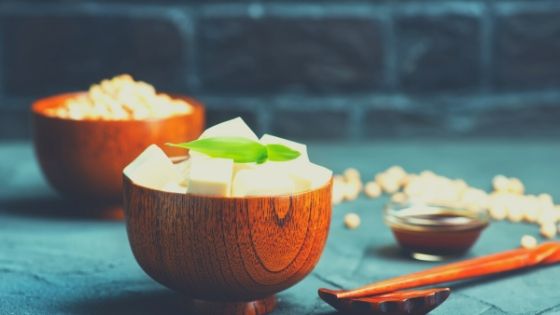 One of the reasons why soy protein powder might be a bad option for you is that you already consume a lot of soy in your diet.

As a vegan or someone who primarily eats a plant-based diet, you are probably already consuming more than enough soy.

Do you eat a healthy portion of tofu or tempeh, drink soy milk, or munch on edamame throughout the week?

If you do, you are probably getting a healthy dose of soy protein.

These whole food soy products are much more healthy than an ultra-concentrated soy protein powder.

In Japan, where soy is a basic part of the diet and the population is notoriously healthy and long-lived, people eat an average of 8 – 9 grams of soy protein a day.

The general consensus is that soy can become problematic when you consume too much of it.

If you are eating minimally processed whole soy products regularly, you may want to consider other plant-based protein powders to boost your daily protein intake.

When it comes to soy, there can be too much of a good thing.

#2 – The Presence of Phytoestrogens

One of the main reasons that soy protein powder may be a bad choice for you is because of the well-known presence of phytoestrogens.

These are chemicals that mimic estrogen in the human body.

Science, however, is starting to question whether these phytoestrogens in soy are really that great for us, especially in excessive quantities.

Evidence is mounting that for some people, these compounds may actually be more of a risk than a benefit.

Phytoestrogens in soy are suspected to play a role in:

As I’ve often said, not every human body is the same.

It is thought that phytoestrogens impact different people in different ways depending on their sex, age, physical condition, and overall diet.

#3 – You Have Thyroid Issues

Soy protein powder is definitely not a healthy choice if you suffer from problems with your thyroid.

There are a few different causes for concern.

Because I am not a doctor, I dare not go into the exact hows and whys of the details. But here are the basics. 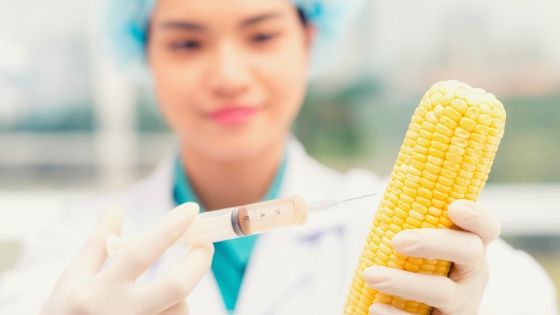 But please, don’t misinterpret me.

I’m all for science.

And the thing is, science is on my side on this one.

Or, at least, science is starting to take a closer look at the subject.

Here’s the deal about genetically modified (GM or GMO) soybeans.

It is the most widely cultivated genetically modified crop in the world. Most GM soybeans have been altered to be glyphosate resistant.

Glyphosate is an herbicide.

In a controlled setting, experts recommend that soybeans be treated with a total of nearly 2 liters of glyphosate per acre, or about 4,000 sq mt.

That’s a lot of glyphosate!

They apply this stuff at various points in the cultivation process to knock down weeds and make harvest easier.

Unfortunately, this stuff tends to accumulate in the soybean itself.

Studies have found that all samples of GM soybeans contain residues of glyphosate and AMPA, an acid that results from the breakdown of glyphosate.

Why should you care about glyphosate residues in your food?

When you buy soy protein powder that is labeled ‘non-GMO’ and ‘organic’ you are assured that you are not consuming any of these toxic residues in your protein supplement.

Aside from the risks of consuming agro toxins, GM soybeans can also trigger symptoms of food intolerance in certain people.

Researchers are starting to take a closer look at the correlation between the introduction and widespread use of GM soy and the rising incidence of soy allergies and intolerance.

Soy protein powder could be a bad choice for you if it is not GMO-free or organic.

Sure, you might not care as much about the environment as you do your own personal health.

But you should be informed about the potential of industrial contaminants and their effect on your body.

This leads me to the last reason soy protein powder could be a bad choice for you.

There is a really good chance that the soy protein powder you are consuming contains soy protein concentrate or isolate as it’s the main ingredient.

I’d be willing to bet that even if your vegan protein powder is not soy-based, it still contains a percentage of this stuff.

Soy protein isolate is over 90% pure protein and contains all the amino acids that make soy such a seemingly great protein alternative.

But you should understand that soy protein isolate and soy protein concentrate are two highly processed products.

Why does this matter?

Just like we should be concerned about glyphosate in our food, we should also be aware of other industrial residues that can contaminate our food.

The vast majority of non-organic soybeans are soaked in a petroleum derived solvent bath.

Hexane is most commonly used.

This facilitates the separation of the fats and proteins in the soybean.

The products then go through a “cleaning” phase where the hexane or other solvents are mostly removed.

The keyword here is “mostly“. There is always some residue that remains.

Luckily, some soy product manufacturers have responded to consumer concerns.

They are reworking their production processes to eliminate the use of chemical solvents.

But not all manufacturers are doing this.

Remember that soy protein isolate and soy protein concentrate are two of the cheapest and most commonly found ingredients in processed foods.

So what should you do?

Stick With Whole Soy Products, Or Use Non-Soy Protein Powders

So there you have it.

Five good reasons why you might want to reconsider soy protein powder as a protein supplement.

It is certainly not my intention to delve into the world of controversy that surrounds soy.

I believe that whole soy products can play an important part in a vegan or plant-based diet.

I don’t want to declare myself as “pro soy” or “anti soy”.

I do think, however, that the subject is worth taking a closer look at.

Understanding the reasons why soy protein powder could be a bad choice for you is important.

When it comes to our health, should we really take chances? As consumers, we must educate ourselves so that we can make the best decisions for our bodies and our health.